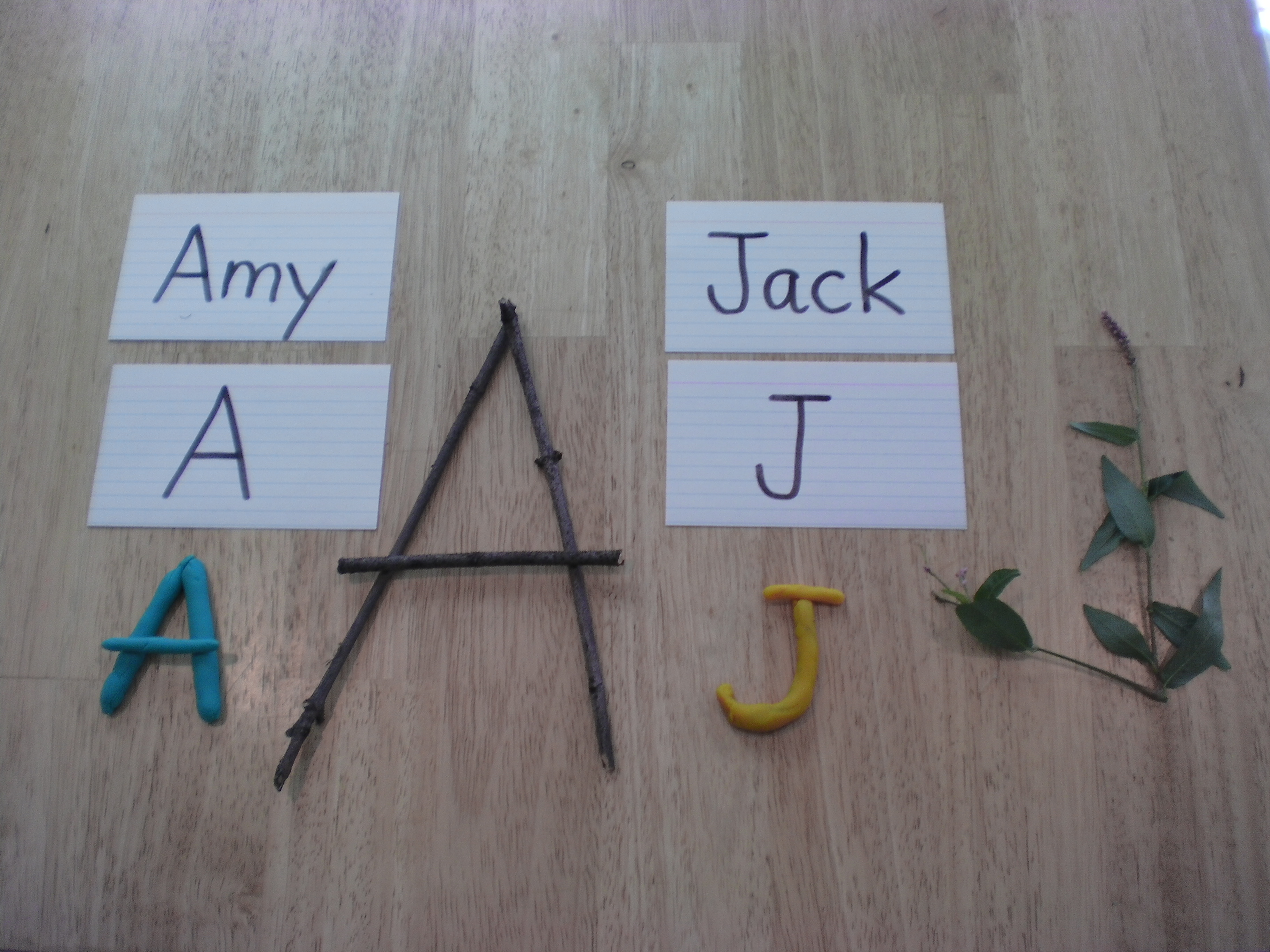 So it’s time for your Kindergarteners to learn the letters of the alphabet. I mean really learn the letters. They all can sing the ABC song, but can they really point to each letter and identify it? Probably not. (And that’s fine by the way). I suggest using the children’s names to jumpstart your exploration into letters. When children get to Kindergarten they should learn to identify their name and the letters in it.

Here are few easy hands-on activities you can do with the children to explore and identify their names and the letters in them. This example is from my Emergent Literacy in Early Childhood Education class. This is the first activity we do to begin our own exploration into letter and word recognition activities to do with children…

Start off by writing every child’s name on index cards and lay them out on a table. Ask the children to go to the table and find their name and bring the card back to the group. If children have trouble, help them! They are just beginning to learn about letters and words and shouldn’t be expected to be able to read their name. Now ask the children to “read” their name out loud. Even if they can’t read (which by the way they should not have to know how to do when they get to Kindergarten – that’s where they learn it!), they will say their name out loud and begin to make a connection between the oral and written word. If children need help, ask them their name and point to the card as you both say it.

Allow the children to keep the card as long as they need it – they will quickly learn to recognize their name if it is displayed in written form throughout the school day.

You can also make the children their own “name puzzles” that they have to put together in either a literacy center or during free play:

And this activity can be done either individually or with you in a large or small group setting. It can go on an easel or Smartboard for large group work, or paper for individual work:

The teacher should write the children’s name in the “My name is ___” blank. The goal is to eventually have the children fill in the rest and be able to count the number of letters in their name while pointing to each letter. This is a math concept (counting) and shows one-to-one correspondence (point to each letter as you count ).

While this doesn’t stop your work with their names, here a few activities that work with the first letter of their name, hence the beginning of their exploration of the letters of the alphabet: Once the children have found the first letter of their name, ask them to identify it. Point to the letter on the Word Wall or Alphabet Chart. Then have some fun with this very important letter…. You can purchase the Play-Doh Party Bag

which gives you 15 individual containers of playdough. These containers are perfectly-sized for individual children and for an activity like this. Using their card as a guide, ask the children to make the first letter of their name out of playdough: This is a great activity for fine motor skill development because the children need to manipulate the playdough into the letters. They are also learning letter recognition not only of the first letter of their names, but of their friends’ names. Once every child is finished, allow them to walk around and look at each other’s, naming the letters they see as they go. Important Tip: Whatever the children construct with the playdough is fine. It is their current interpretation of the letter AND a representation of their fine motor abilities. Viewing their work will give you a clue as to where they are with these two skills.

Finally, it’s time to take it outside! Ask the children to bring their letter cards outside and find something that looks like the letter. It can be one complete piece of nature or a few pieces that they put together to make their letter. Here are two examples from my class: Listen to the children as they explore outside and look for representations of their letters. If you can take pictures or video, do it! As you listen to their interactions with each other and with nature, talk with them about their work. Ask them questions and provide assistance when it is needed. This should be fun – they won’t even realize they are learning.

Once all the children have “found” their letters, return to the classroom and display their work on a large table. Initiate a discussion about what the children found and what letters their pieces of nature represent. It isn’t necessary to make every kid talk – just conduct a conversation with the group and see who shares and what they say. Again – this should be fun.

You may be able to construct most of the alphabet depending on the children’s names. You can extend the activity by working with the children to find the rest of the letters that aren’t represented by their names. This is something that I actually did with preschool children when one child held up a stick and said it looked like the letter “C.” His proclamation prompted the rest of the group to look for more letters outside, and we eventually had the entire alphabet. Talk about letter recognition!

This site uses Akismet to reduce spam. Learn how your comment data is processed.