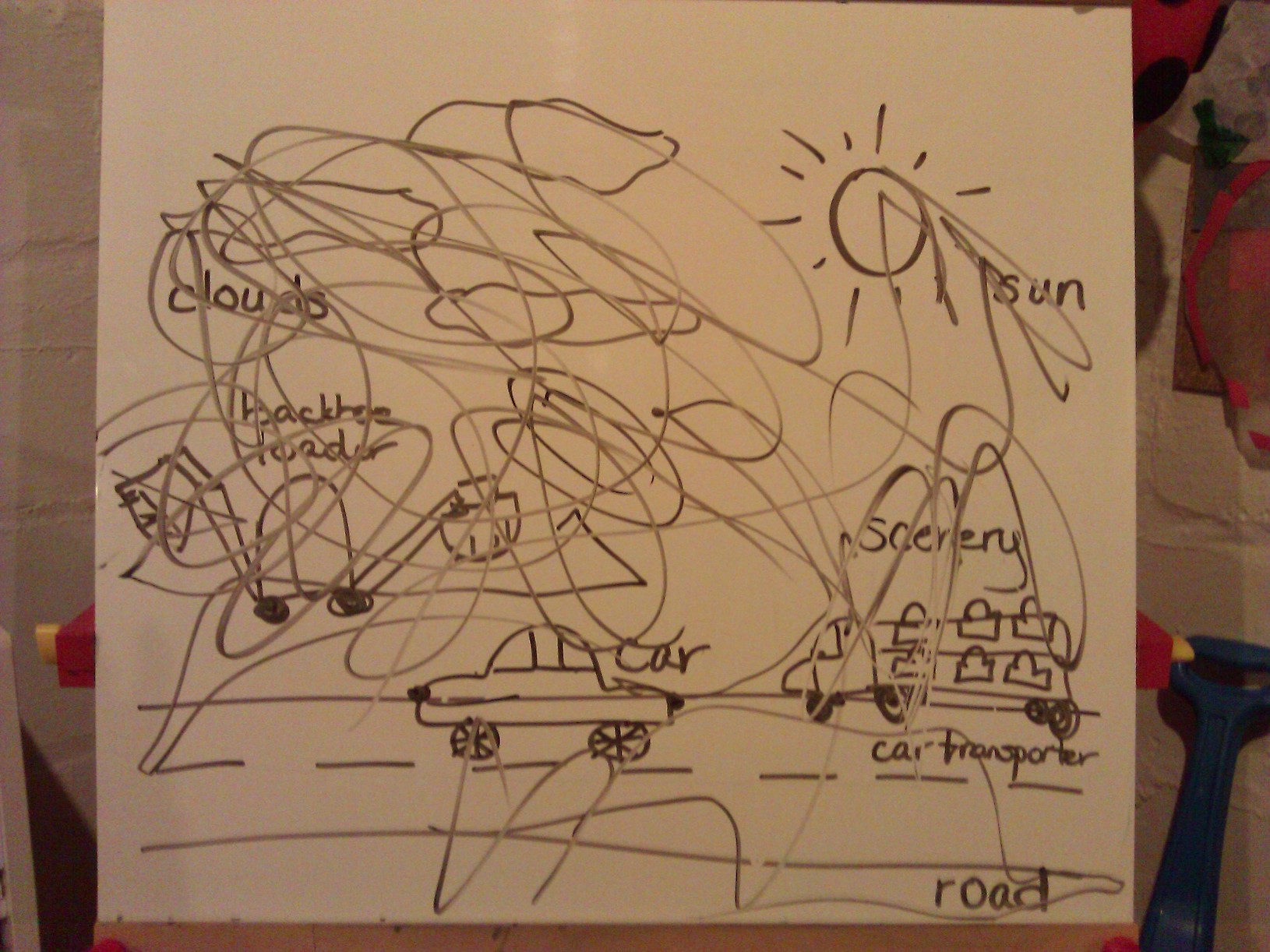 Interactive Drawing is a practice found in many early childhood classrooms. The premise is that a teacher explains to the children that authors use drawing to show their thinking on paper. It is also emphasizes that drawing is writing and can communicate a message. This is especially important for children who aren’t writing yet, and are still in the drawing stages. Because truthfully – they are writing!

A traditional Interactive Drawing session has a teacher begin a drawing and individual children either add to it or finish it. These sessions usually occur in preschool and up. Here is a twist on Interactive Drawing that will work with toddlers. It evolved from an experience I recently had with my almost 2 1/2 year old daughter. As we talked and drew, I realized as we were working that we were participating in our own version of Interactive Drawing.

I picked up a marker and thought out loud “I wonder what I should draw?”

Miss H walked over and said “a sun.”

I asked where I should draw it and she pointed to the top right hand corner of the easel.

I drew a sun, talking myself through it out loud. I then labeled it with the word “sun,” spelling it out as I wrote. Labeling drawings is a skill that you want children to begin to exhibit by Kindergarten, but introduce it as early as you can.

I then asked her what else I should draw and she thought about it, and then added the rest of the objects you see on this picture: After the sun she added clouds and then the road.

When she seemed stumped as to what she wanted me to draw next, I asked her some guiding questions. I asked her what might be on a road, and then she suggested the other three objects. Guiding questions are an appropriate form of scaffolding in this instance, and help children extend their thinking instead of giving up.

In the end she asked for the marker and began drawing on the easel. As she added her drawings, she said she was drawing all of the different objects that I had drawn (naming them one by one). Here is the final product: The first picture above is actually a redraw of this original picture – I realized after she was done that I wanted to document the before and after. So I took a picture and recreated it.

So what was the point of this? Well, it was an incredibly interactive literacy experience. We used oral language to identify what objects to draw, the characteristics of them and how they were spelled. She was able to see that what she says can be drawn and written down (aspects of the Language Experience Approach). I modeled writing and reading for her and then she took the opportunity to draw and write on her own based on what we did together. Can’t get much more literacy than that! Try it with your toddlers and see what pictures you come up with together…

This site uses Akismet to reduce spam. Learn how your comment data is processed.